MUDANCE was founded by Galina Gladkova.
Born in Toronto, to and Nikolai, Russian émigrés who shared their culture and language with their family, she discovered her love of dance at the age of four and began her first lessons with Lessia Tuhay-Bey and Janet Baldwin.  She completed her R.A.D. Advanced certificate with Gladys Forrester.

Summers were spent at the Banff Centre School of Fine Arts in . It was here that friendships with artists in both Music and Dance were made, which still exist today. Her pedagogical experiences began with Natalia Zolotova and Boris Rachmanin from  came to on Spohr’s invitation. During six weeks, 2 years repeatedly, Galina was interpreter and assistant to these great teachers during Masterclasses and rehearsals for the Banff Festival Ballets. Upon completion of her Grade 13 academic studies, she left to continue her dance education in . 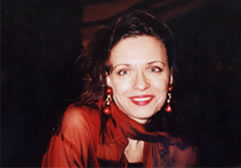 After her first engagements in and , she was invited by Heinz Spoerli to join the Basel Ballet bringing her to in 1981. In this company Galina experienced choreographers like Spoerli and Hans van Manen and toured throughout as well as the first two American tours of the Basel Ballet to .

Continuing her career as guest artist she worked with choreographers: Ricardo Duse, Jean Deroc, Cathy Sharp, Paula Lansley, Dietmar Seyffert, Tom Schilling and Armin Wild, many of whom created works for her.

She participated in pedagogic seminars in , and , continued teaching children and company classes and created short choreographies. She completed her string bass studies with Yoan Goilav (Lausanne Conservatory Instrumental Diploma).

Galina returned to the Basel Ballet in 1991 under the new director Youri Vamos. The following seasons were filled with his full length ballets including tours to , and . As well, mixed bills from Nils Christie and guesting invitations for .

Quadriplegia suffered during a riding accident caused an abrupt end to her career. The long rehabilitation forced Galina into new orientations resulting in the founding of GALIMUDANCE and ultimately in the birth of MUDANCE - the first summer academy and festival taking place in 1999.

During tanzt, the International Dance Festival, Galina has collaborated in diverse functions including bilingual stage manager for the guesting Mariinsky (Kirov) Ballet.

She has given ballet training for touring companies such as the Fosse Musical.

In 2001 Galina began the Masters Programme in Arts Management at the , graduating in 2003 with a Masters of Advanced Studies Degree. Her research papers include “Dance Education in ” and “Dancer’s in Transition”. Her latest paper “ Dance Education in ” was commissioned by the Arts Council of Switzerland  for “Projekt Tanz”.

Galina is a regular lecturer for the Accident Prevention Programme of the Basel Police Department and Rehab Paraplegic Centre.

Her engagement for dancers continues in private coaching, career consulting and management. 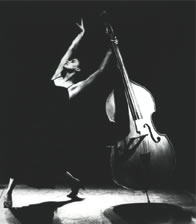 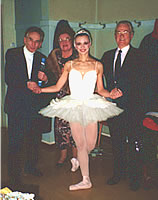